If your first question is “What’s Suave.io” or “Why would I use it ?” then I suggest you to read those slides

Fake is a DSL permitting to write advanced automated builds in FSharp. It can be used by beginners in FSharp because the DSL can hide some FSharp code comlexity. We can define multiple targets like in a Makefile.

FAKE Deploy is an agent like MSDeploy installable on your servers. His role is to receive your packaged server applications and install it running a FSHARP deployment script.

Why should I use it instead of another tool ?

Everything is documented here, it’s quite simple.

Open a PowerShell as Administrator:

We will work on this project. MailCheckerRestApi is a REST Api checking emails validities connecting to their SMTP and starting a sending operation. 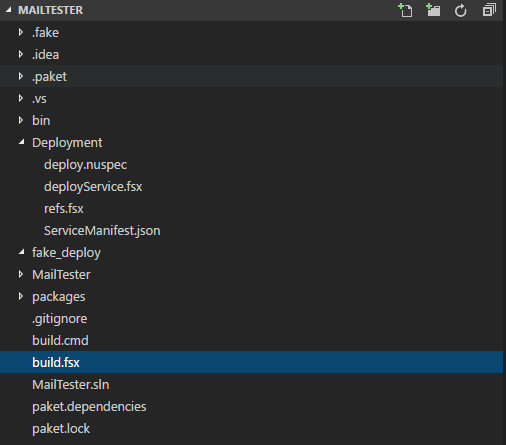 “Deployment” folder contains scripts and resources used by agent on server to install service. Application is using Topshelf for his Windows Service hosting.

So now look at the build.fsx …

packFakeDeploy () function is packaging the compiled application in the nuget

Then we can create targets dedicated to a local deployment for example:

In deployService.fsx I used FAKE because there are a lot of helpers like XCopy, ProcessHelper, etc… I used a simple JSON typeprovider to parse ServiceManifest.json.

addUrlAcl is creating Url ACL to authorize Suave to create a HTTP endpoint with the service impersonation.

It is really cool to write this script in FSharp because it’s easy to test and debug. We don’t need to upload the entire package to test a change (a simple ALT + ENTER in the IDE is sufficient)

Clone project and open your powershell as Administrator.

Using it on a production server

When you install an agent on a production server, you should read Security section of http://fsharp.github.io/FAKE/deploy.html to enable authorization keys. I suggest to restrict IP access to your continuous delivery server.